The Tompkins County chapter of the New York StateWide Senior Action Council was in its infancy — just 2 years old — when the pandemic hit last year. But members continued carrying out the mission set by the parent organization nearly 50 years prior when StateWide was first created: advocating for issues that affect senior citizens and providing resources to help seniors with some of the major challenges the demographic often faces.

Wil Lawrence, the Tompkins County chapter president, was one of the founding members of the chapter, and she described some of the things the chapter and the Council did prior to COVID-19. For example, she and others would travel to Albany to meet with State Assembly members and state senators to talk about issues affecting seniors, she said.

“For me, it was really thrilling and a real eye-opener about how government works,” she said. “And first, it was frightening because I’ve never done this before and these are people who are elected officials, but StateWide is really good at providing enough background information so you can feel comfortable about what you’re advocating for and also in helping you to feel comfortable speaking up to your legislator.”

That advocacy work is also what attracted Susan Beckley, Board of Directors member for StateWide’s Tompkins County chapter, to join StateWide a couple of years ago. 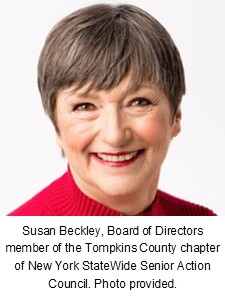 “I am particularly interested in single-payer, universal health care,” she said. “And when I found out that StateWide was a strong proponent and endorser of single-payer, universal health care and the New York Health Act, then I decided to join and participate in their advocacy groups for this issue, which affects all New York state residents as well as impacting seniors.”

“Before the pandemic, we used to be out in the community a lot in person. We would hold events a lot, and our meetings would be in person,” she said. “Now, our task force meetings have launched virtually from this, and we’re still there. We’re still just as involved in the community, but now, we get to do it through Zoom. And so, that’s been really helpful.”

Sarah Askew, Council outreach counselor, added that the pandemic has actually had a positive effect on the Council’s overall messaging.

“The pandemic has really just brought to light issues that we always knew existed and were always there, but I think it’s really bringing it out into the forefront for where it’s more in the spotlight now, things like access to home health, access to telehealth, access to affordable prescription drugs, and then the need for the New York Health Act and the ability to have cradle-to-grave care,” she said.

Lawrence added that that phenomenon shows how it can take extreme situations for people to notice systemic problems.

“The pandemic showed a lot of our legislators that the things we’ve been advocating for really would have made a difference during the pandemic, including single-payer health,” she said. “And we’ve long advocated for nursing homes to not be under private ownership or at least with more oversight, and we’ve also kept track of a lot of what has happened with home health aides, availability and payment of home health care.”

While the Council and county chapter have continued their advocacy work through the pandemic, they’ve expanded some of the issues for which they’re advocating, like the challenges seniors face because of the digital divide.

As Buta explained, HATF, 2-1-1, area libraries and community partners across central New York’s eight counties — including Tompkins — have partnered to offer Wi-Fi access at community sites across the region. The project kicked off March 15 of this year and is working to create additional telehealth access sites throughout central New York.

“Over these next coming months and this next year, we’re going to definitely work with the chapter to get more seniors there at the libraries using these resources, especially for people who don’t have great internet connection at home, and figure out a great, safe way to do it that really prioritizes that in this COVID era,” Buta said.

Buta added that even if seniors don’t end up using the sites for doctor’s appointments, they can still “connect with their grandkids over Zoom for the first time in a while or anything else like that to help with some of this isolation and this loneliness epidemic that we’re seeing with older adults.”

As Beckley explained, the lack of technology access among seniors has also had an adverse effect on chapter membership.

“It’s a very, very difficult population to bring into the fold at this time,” she said. “Because of the pandemic, many, many seniors don’t have internet access. They’re not familiar with things like Zoom, and the devices and all that it entails are a hurdle to overcome. And so, unfortunately, we don’t have as many people showing up to our meetings.”

But the chapter continues to see participation, Lawrence explained, with some folks opting to call into monthly meetings to participate in whatever way they can. Beckley added that especially well-attended events the chapter held were two town halls last year with candidates for State Assembly.

“Those types of things were very helpful and gave people a sense of whose office they were calling and what the issues were that were affecting seniors currently,” Beckley said.

If you are interested in becoming a Council member, membership is $20 a year. The Council hosts monthly teach-ins on senior-related issues and holds free events to help educate seniors on legislation affecting their demographic so they can get involved.

Askew added that Council and chapter members routinely seek out feedback from seniors in the area and encouraged interested residents to reach out if they have issues they want addressed.

“We really want to know locally what impacts you because it’s kind of that thing of if one person asked the question, it’s on the other people’s minds, like things that affect seniors here affects seniors across the state,” she said. “And having that information and having that connectivity really allows us to respond in real time.”

Visit nysenior.org/chapters/central-finger-lakes to find out more about the Tompkins County chapter. For more information on the Council, visit its main site at nysenior.org.